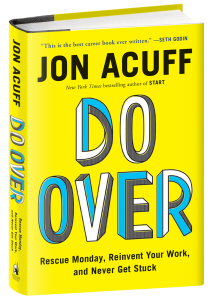 conference.  If you don’t know who he is, you should look him up.  I’ve been part of his 30 days of hustle Facebook group for about 6 months now and it’s really been cool to learn from him and the other hustlers in the group.

If his name sounds familiar but you aren’t sure he wrote a book and a blog called, “Stuff Christians Like”.  He’s also written several other books.  “Do over” is his latest and I’ve got a pre-order copy, and it’s fantastic.  You can still pre-order your copy, which comes with bonus gifts at acuff.me but don’t wait cause I think monday is the last day you can order and get the perks.

Anyway, He was in town to speak at some conference so he posted on his twitter that he was going to be in Phoenix and that people should come eat barbecue and hang out… so I did. 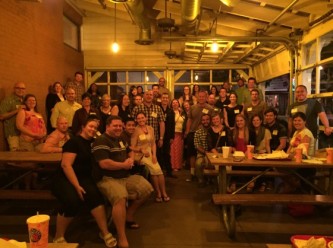 He actually wrote about it on his blog  and posted a picture  of me… Okay It’s a group shot with everybody but you can see my head in the back if you zoom in.

The evite, was a bit shady and I didn’t know for sure how many people would be there, or if I would even fit in.  I was slightly terrified that it was a meeting for professional speakers and authors and I would be a very small fish in a very big pond but I took the small step of courage and went anyway.

(PS Gilbert is not the same as Phoenix @JonAcuff)

Anyway, there were about 50 people there so it was small enough that you could meet people and network a little bit.  I met a really awesome entrepreneur that I’m hopefully going to feature soon when I launch  #InterviewingAwesome.  More about that below.

I also got to meet John, which was a whole new level of cool.  I don’t usually get super excited to meet authors or famous people.  But Jon’s excitement rubbed off on me.  He is excited about what he’s doing and he’s telling people about it.

He only spoke for about 15 minutes and just shared some things that he’s been working on but then he asked people to stand up and say their name and what they are hustling on. It was really cool.

I “didn’t get a chance” to share my hustle at Joes Real Barbecue in Gilbert, which is code for “I chickened out” so I’m going to take the chance here.

My name is Andrew and I am a Business Owner.  I’m working at a church right now, and I love it, but I’m also starting a business on the side.

The business is called Novel Consulting and though we have tons of plans for where we want to go, our focus right now is story driven life coaching.  We believe that all people have and are a story but we also understand that the way you tell that story shapes the way the world sees you and more importantly, the way that you see you.

We just got our first client this week, which is super exciting and I’m frieking pumped.

I’m also a blogger and an author.  My blog is actually pretty good.  I don’t say that to pat myself on the back but more to say that I’m really proud of the work that I’ve done on it.   I mean I enjoy reading it, so I hope other people enjoy it too but I write just as much for me as for the people reading it.

Right now I’m really excited about a series of blogs that I’m calling Interviewing Awesome.  The basic idea, is that I am going to pick people that I find inspiring and interview them, ask them about their life and their business.  My hope is that the interviews with inspiring people will not only encourage my readers but give me a chance to support awesome people as they work towards their awesome goals.  Win!  Win!  Win!!  I already have one interview that is done and scheduled to post on Friday the 10th so check back then to meet Ashley Frank, but I have two more interviews that are in the works and my goal is to do at least one a month.  Hopefully more.

I’m also currently working on a book.  I’ve had a dream to write a book since High School and it’s finally happening.

The book idea, at least right now, is “mentorship made easy”.  My idea is to write something that will give an average person the tools and inspiration to either find or become a mentor.  Ideally, both.

Whew! Okay those are my goals.  They are now out there.  Read Jon’s blog so that you can hear him explain how important voicing your goals is.  The hardest part of bravery is not doing something brave.  It’s telling people that you did something brave.

Let me know in the coments what you are doing that is brave.  Who knows, maybe I’ll be Interviewing your Awesome soon.

I reserve the right to moderate comments as I see fit. I encourage spirited discussion and will not turn you away if you dissagree with me or others but play nice or I will take your toys, call you mommy, and send you home.
Loading Comments...